Poland is backing away from coal. People already understood that renewable energy sources are both cheaper to build and cheaper to operate. They are expected to have low cost of electricity to decarbonize their footprint. Demand for green energy has been going up but still the Polish dependence on fossil fuels is much higher than in other European countries. To overcome these challenges Poland needs a new growth strategy.

The potential of photovoltaic, offshore, onshore market to achieve the energy transition and contribute to post Covid recovery is being understood also around policy makers. In February Polish government adopted Policy Energy for Poland until 2040 (PEP) which establishes the framework for the energy transition, outlines the targets for progress in the energy transition and becomes the Polish contribution to the Paris Agreement and European Green Deal. As was presented in PEP, 260 billion zlotys (approximately 56 billion euros) from European and national funds under various mechanisms will be allocated to the energy transformation. Investment will involve approximately 880 billion of Polish zlotys (approximately 189 billion euros). It creates a rapid and effective growth impulse in the renewable energy sources sector.

In this article we would like to present a summary of the development of the RES sector in Poland in all PV, onshore, offshore markets with short review on binding support schemes.

The general overview on renewable energy sources sector in Poland

The renewable energy sources ("RES") sector is experiencing a rapid development in Poland. Currently, the two most popular sources of renewable energy are onshore wind farms and photovoltaics (PV). According to the latest data, as of December 2020, the country has added, over the course of the year, almost 500 MW of installed wind capacity (up 8.3% year-on-year), while as much as 2,430.8 MW of installed PV capacity, which is up 159% year-on-year (Statistical Information on Electricity No. 12 (324) - December 2020 (Warszawa; Agencja Rynku Energii S.A., 2021), page 14). The government announces further intensive development of RES in both fields. A factor that may hinder the development of onshore wind energy is the 10H-distance requirement. There are also reports of increased work on amending the RES Act in scope of moving away from the 10H-distance requirement for onshore wind farms. This regulation is expected to have a positive impact on investment in the RES sector. But still the date of the expected adoption of that amendment, is not yet known.

It is worth to say that a given RES installation may benefit from the auction-based incentive scheme if it is selected within the so-called “auction for the sale of the electricity from RES installations” (“Auction”). Under the current law, auctions will be held until 30 June 2021 (it is expected to be prolonged). The period of support for such installations lasts for a maximum of 15 years from the first sale of energy produced by a given installation (however, no later than 30 June 2039 and in the case of onshore wind farms no later than 31 December 2040). This period may be further shortened with respect to given projects covered by given auction by way of the regulation issued by the Minister of Climate and Environment.

On 18 February 2021, the Act on the promotion of power generation in offshore wind farms, i.e. the Polish Offshore Wind Act (“OWA”) became effective. The OWA provides a comprehensive regulatory regime for the development and support of offshore wind farms (“OWFs”) in the Polish exclusive economic zone in the Baltic Sea.

The key matters regulated in the OWA are: (i) a support scheme for offshore energy, (ii) a regulatory regime concerning the maximum price of power, (iii) a regulation concerning OWFs grid connections, (iv) a reset of existing seabed permit proceedings regarding OWFs projects, (v) the supply chain plan, and (vi) fast-track permitting procedures.

The OWA provides for a support scheme for OWF project owners (beneficiaries). The support is based on the contract of difference formula - this will create the right to settle the negative balance resulting from the difference between the average market price and the strike prices (“CfD”). In the case of a positive balance, the beneficiary will be obligated to pay back the surplus. The beneficiaries will be entitled to a CfD-based subsidy for 25 years (counting from the first power generation). The subsidy will be capped by multiplying 100,000 hours and the installed capacity of the OWF. The beneficiaries will be obliged to generate power and feed it into the grid within 7 years of the date the CfD was awarded.

The OWA defines two different stages in which the CfD may be awarded. First stage (only for the most advanced projects) – support granted by means of an administrative decision issued by the President of the Energy Regulatory Office (“CfD Decision”), and subject to the individual notification of State aid to the European Commission. Second stage II – support granted within the auction-based incentive scheme. In March 2021 the Minister of Climate released the regulation on the maximum price for electricity generated in offshore wind farms in the amount of 319, 6 (75 Euro) per 1MWh.

The OWA provides that all seabed permit proceedings concerning OWFs – ongoing as of the date of OWA’s entry into force – will be discontinued, if OWF’s location does not correspond to the specific OWF’s locations set forth in Annex 2 to the OWA, as specified on the map below. 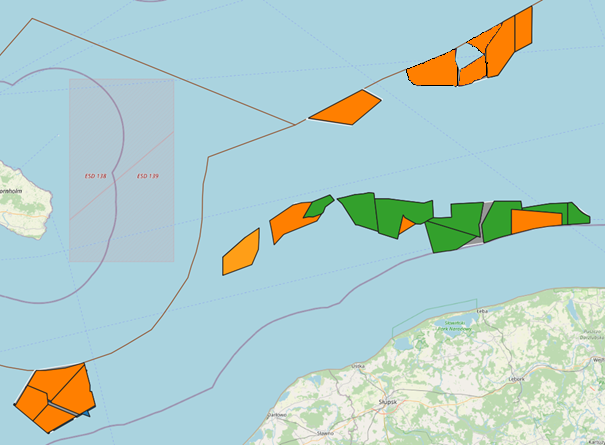 Map – areas specified in Annex 2 to the OWA – orange; most advanced projects eligible for Stage I CfD support - green

In practical terms, almost all existing proceedings will be discontinued and, consequently, areas marked orange will be available for new competition. This will create an opportunity for new investors to enter Polish offshore market.

The large energy potential of the Baltic Sea, estimated at 80-90 GW (depending on the methodology used) makes it an area with the second-largest offshore wind potential in Europe after the North Sea. The OWA allows Poland to use this potential - Poland can become a leader in offshore wind development in the Baltic Sea, with its target installed capacity of 28 GW in 2050, providing one-third of the total capacity that could be built in the region. By creating a regulatory framework for the offshore wind sector, Poland will join the implementation of the European Green Deal, opening the possibilities for investors to obtain additional funding for energy transformation.

Summing up, there are a lot of opportunities in Poland. Almost all major players are coming to Poland and open their offices with the intention to join the RES race. There is a big potential for energy companies (sale/installation/ service/operation of data) for the next decade.

Lessons of Poland and the impact on Ukraine

In Ukraine, as well as in Poland, RES is developing fast and these countries are similar in terms of development. At the same time, Ukraine has chosen to stimulate the production of electricity from RES through a “green” tariff, and Poland has chosen to use auctions and other incentive mechanisms.

The start of renewable energy auctions in Ukraine is constantly postponed for various reasons, so the prospects and exact launching dates of auctions are unclear. The example of Poland shows that auctions planned in Ukraine are less efficient. Poland does not use such an incentive as a “green” tariff, but uses auctions more like “European-style” auctions, when the state does not pay for all electricity generated, but only a “premium”. This significantly reduces the burden transposed on the state and helps RES producers to move from absolute state support to partial support, when gradually RES producers look for markets on their own. The key to the successful development of “green” energy should be market-based conditions that would operate for RES producers on the same basis as for other electricity producers.

For RES producers, the support in the form of a “green” tariff is more convenient, but due to the increase in electricity production from RES, the price of electricity in Ukraine for the final consumer is increasing. The introduction of auctions and contracts for difference should reduce the financial burden to compensate for the investment of RES producers.

Offshore wind trends are interesting for Ukraine. Currently, offshore wind projects are proposed in the form of an idea, but investor's interest is growing. To implement such projects in Ukraine, it is necessary to adopt new rules that will allow the construction and maintenance of stationary and floating wind turbines, construction and connection of wind turbines to the grid, cable laying, as well as the construction of offshore and onshore substations. Also, gaps in the regulation of land and underwater areas, the establishment of easements for areas located in coastal areas and within the sea shelf, the definition of the purpose of areas for offshore facilities, as well as the regulation of procedures for issuing permits for construction work as “under” and “above” water. It is required to create agreements with neighboring countries sharing the Black and Azov Seas. The most important for the development of offshore wind generation in Ukraine is the establishment of incentives in the form of “green” tariff or renewable energy auctions or other forms of support. There are no legislative changes in this regard yet. 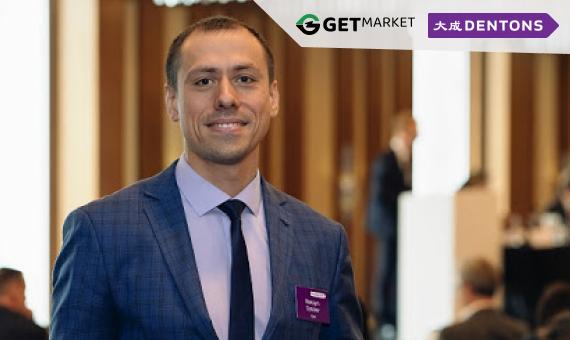 How to accelerate the development of the bioenergy industry in Ukraine? 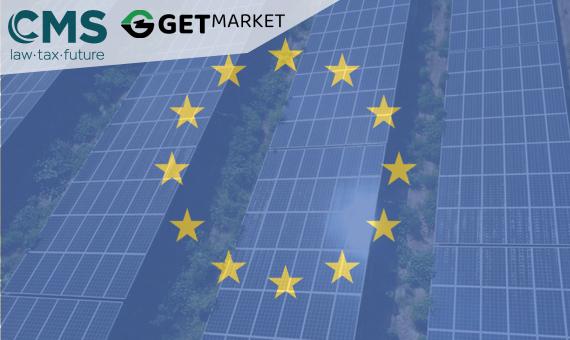 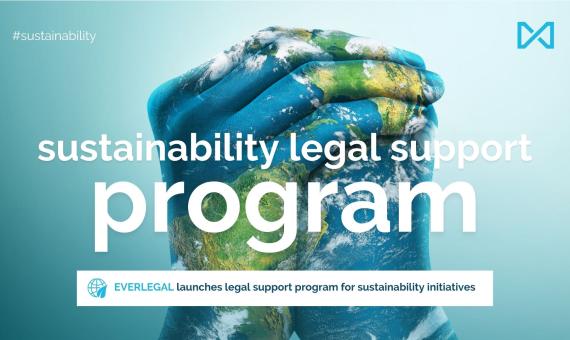 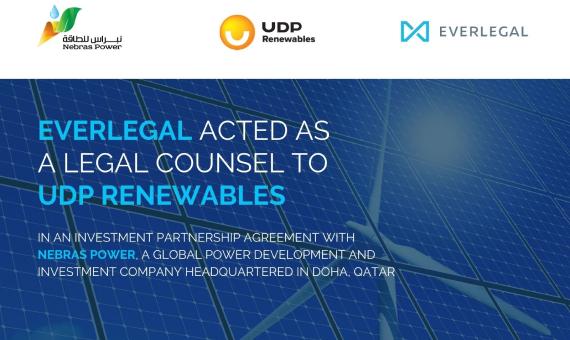 EVERLEGAL acted as a legal counsel to UDP Renewables in an investment partnership agreement with Nebras Power, a global power development and investment company headquartered in Doha, Qatar